Question: What was the SECOND deadliest structural collapse in US history (The World Trade Center was the worst).  The lessons from that collapse three decades ago are as important today as they were then. 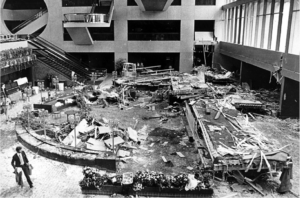 114 people died, and 216 more were injured in the collapse, for a number of reasons all directly related to a dereliction of duty in quality management – a “comedy of errors” if it were not for the human loss.

What caused the collapse?

Here is a summary list of quality failings, all of which contributed to the collapse:

Except for the last two points, you might have concluded that the engineers were in the clear, and that the fabricators and/or the owner were at fault. Well, not quite. The engineers were found guilty of gross negligence, misconduct and unprofessional conduct, and their licenses to practice in that state were permanently revoked. Game over.

As usual in litigation, the facts are more mired in complexity than the simple summary above suggests. If you want to read more about the collapse of the atrium bridges in the Kansas City Hyatt – Wikipedia carries a good account (Google “Hyatt Regency Walkway Collapse”).

Another good article can be found in the Engineering Library: (http://www.engineering.com/Library/ArticlesPage/tabid/85/ArticleID/175/Hyatt-Regency-Walkway-Collapse.aspx).